For an affordable gift and a memento of Hawaii, the ONE DOLLAR Bronze Aloha Festival Commemorative Dala was an ideal choice. In the spirit of the Aloha Festival, the Mint made a truly remarkable Aloha Festival token for only ONE DOLLAR! It featured the same distinctive obverse and reverse designs as the more costly gold and silver proofs. The Official bronze commemorative festival dollar was a historic issue in its own right as numismatically it is "fantasy money." Most commonly known as a "trade token" that year's Aloha Festival Dala was available at the face value of "ONE DOLLAR" and the legend states on the reverse states that it is: "REDEEMABLE - GOOD FOR ONE DOLLAR IN TRADE" with the Mint name and address. And indeed it was circulated and accepted by merchants throughout Hawaii as payment for their goods and services. And of course, the Mint also accepted the Festival Dala towards payment. OIP for the bronze Aloha Festival Dala was $12.00 for ten US dollars. RE: MINTLINE SEPTEMBER 1996

Skip to the end of the images gallery 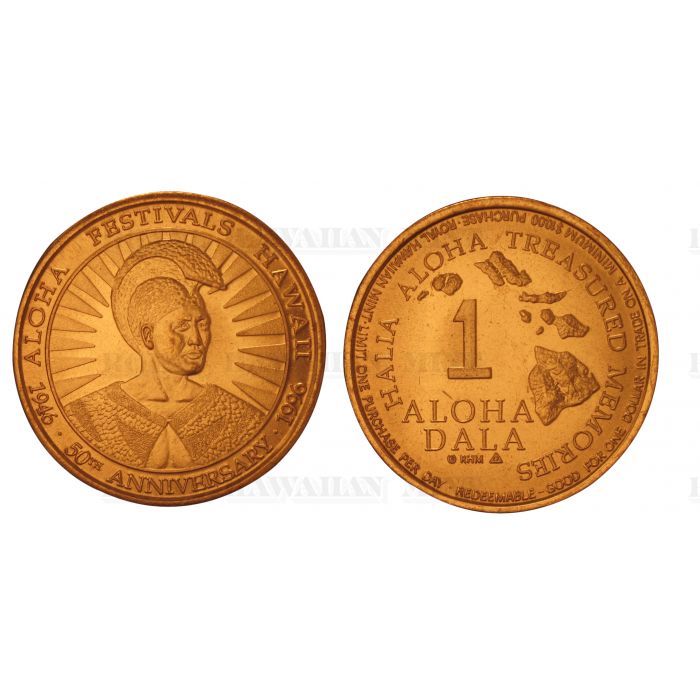